The Asus TUF FX705 is an interesting gaming laptop with good performance and value for money. The Asus ROG series is meant for passionate hard-core gamers with a hefty price. But the relatively new TUF series is meant for price-conscious players. The laptop has a sturdy construction, compact and fairly light form factor and good performance. The 144Hz IPS display gives out the best results and the aggressive pricing of the laptop makes it the best buy.

We have spent a few weeks with this high-end FX705G and must say the notebook has strong points and quirks. This article gathers our overall impressions of the Asus TUF FX705 mid-range gaming laptop. Discover where the TUF FX705G exceeds expectations, where it leaves an opportunity to get better and how it fares against the choices out there. The top end model of Asus TUF FX705G is priced at INR 1,24,990 whereas the range of notebook starts at INR 79,990. 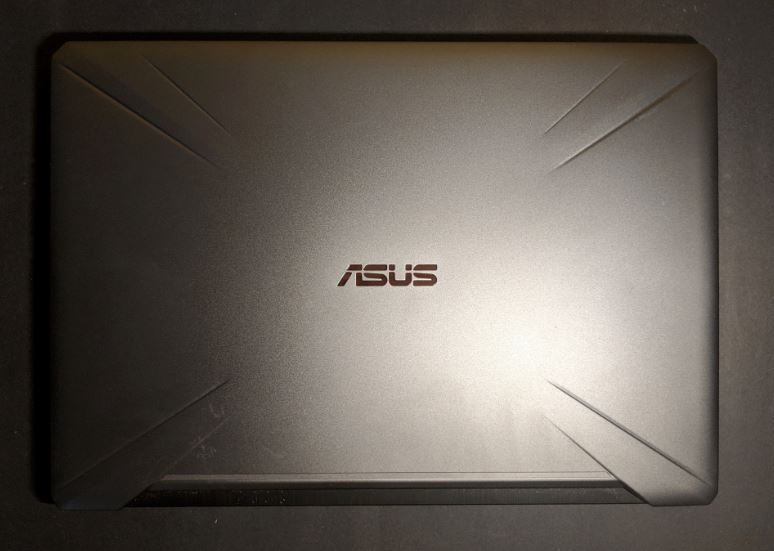 The Asus TUF FX705G has a premium finish with metal lid and the base unit made of plastic, it looks like aluminium due to the finish. The entire body has a very positive verdict and a sturdy design. The notebook is fairly light, thin and well built. We found the thin display bezels to be playing a major role in reducing the overall dimensions of the laptop. The FX705 is a compact looking design for a 17-inch device.

Asus has put in good efforts to make the laptop elegant and playful. The case has numerous pattern and texture. We did not find many flaws in the overall design element of the laptop. The quality of the case is appropriate with respect to the price been offered.

The series comes with a cleaner design element compared to its other gaming notebook. The FX705 is available in two colours. Practically the FX705 fits well on a desk with rubber feet, spacious palm-rest with corners around and blunt edges. Cooling which is extremely important on a gaming laptop, the FX705 has intakes on the bottom and on top of the keyboard and on the side and output on the back. 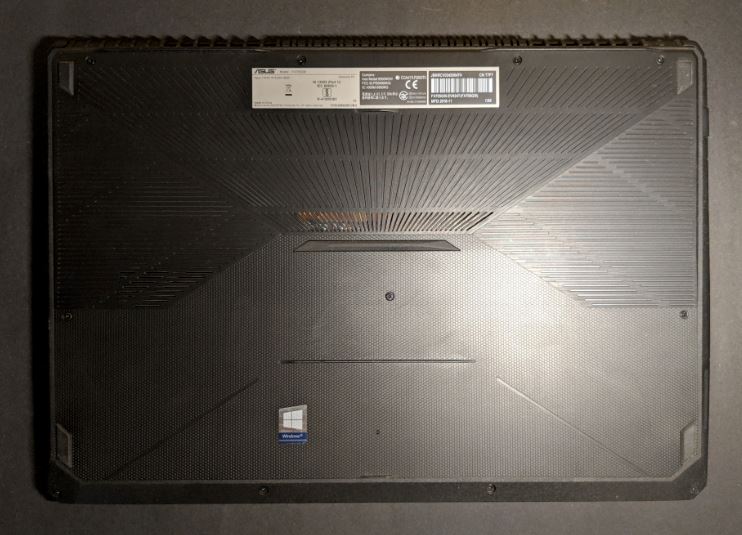 Overall, Asus TUF FX705 is a well-built computer with a compact and light build. The price at which it is been offered the notebook looks premium and good build.

The console of the FX705 depends on the Scar version. The typing experience on the keyboard is between hard and soft. The keys on the FX705 feel like they need to be strongly pressed which could take a toll on both speed and accuracy of typing. Overall feedback of the keys was hard. Gamers will like some of its features, as the improved reliability and n-key rollover. 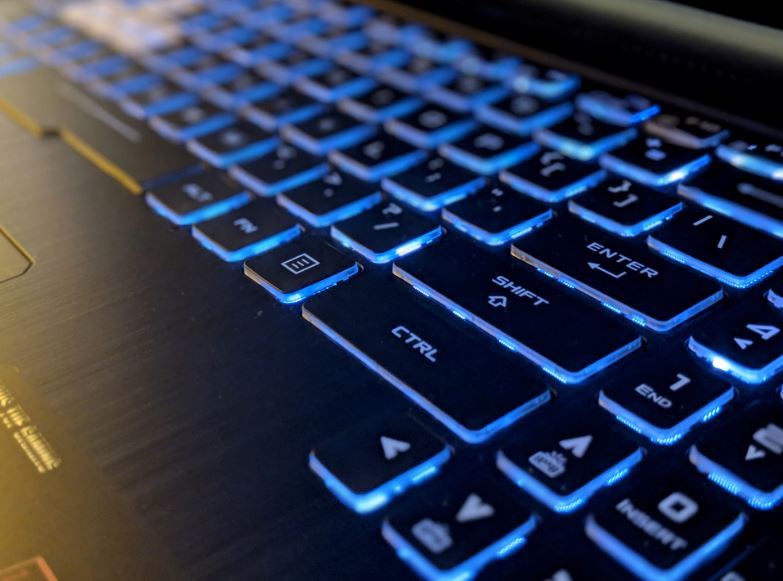 The Asus TUF FX705G needs to yield indicates when it comes to the lighting. Even though the 17-inch laptop is, as mentioned, equipped with RGB lighting, it is somewhat lacking in terms of intensity and evenness, even at the highest setting.

Asus has pursued the present pattern and introduced a ClickPad without devoted keys in the Asus TUF FX705G. Fingers easily float over the touchpad because of the smooth surface. The touchpad is additionally useful for the upheld gestures, which can be utilized to rapidly zoom into and scroll through website pages and documents. We were less satisfied with its precision, which could be slightly better. Everything considered, the input devices still perform well, despite the fact that they don’t exactly make the highest priority on the list. 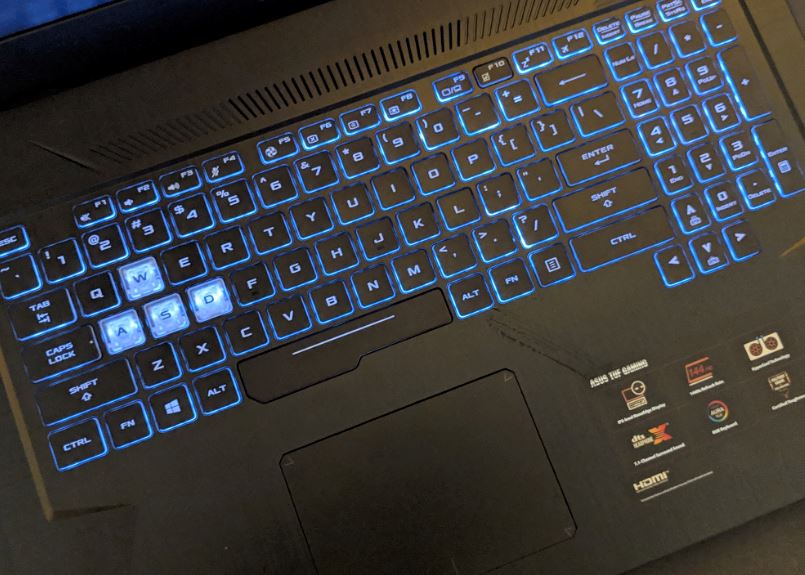 The trackpad works great. It’s a fair-sized plastic Synaptics surface with Precision drivers and it handles ordinary swipes, gestures and taps easily and reliably. The physical clicks are pretty OK also, in spite of the fact that a bit on the clunky side.

Buyers will have to adjust when it comes to the ports made available on the notebook.

So as to decrease production costs, Asus renounces a card reader, yet additionally the Mini DisplayPort. It additionally comes up short on a Thunderbolt 3 port. The FX705 does not have a USB type-C 3.1 Gen2 port. The three accessible USB ports all hold fast to the type-A (2x 3.0 and 3.1 Gen1 and 1x 2.0) standard.

External displays are associated by means of the HDMI 2.0 port, headsets and microphones can be connected with the audio jack. There is also an RJ45 connector. All the ports on the laptop are placed on the left side, mouse movements are not restricted. 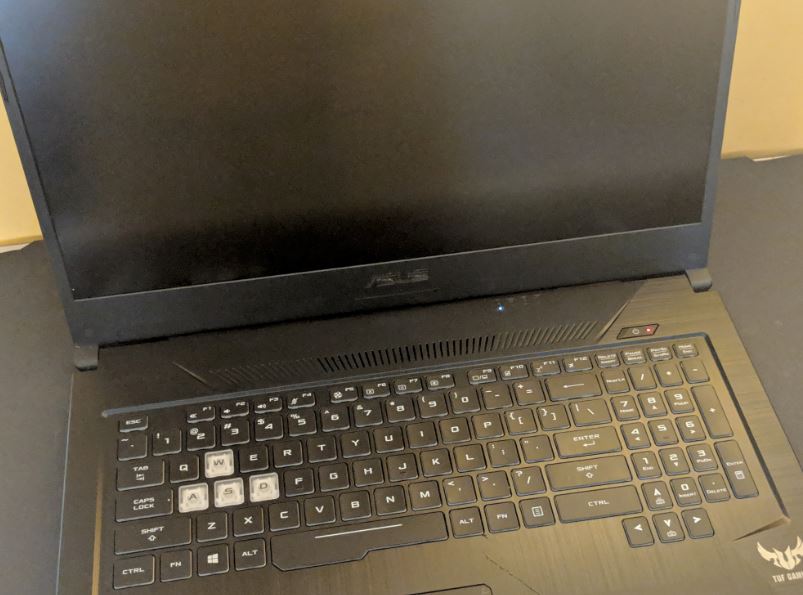 While other budget gaming laptops just offer a 60 Hz showcase, the Asus TUF FX705G setup we tried has a 144 Hz panel introduced. Its a fast screen with good response time, a great option for gamers, when paired with the GTX 1060 graphics which deliver sturdy frame-rate. The panel’s quality is good not that great with good colours, contrast and black-levels but low brightness and some uniformity issue.

In its maximum configuration, the Asus TUF FX705G represents a rock-solid gaming notebook. The Core i7-8750H and 8 GB of DDR4-RAM which can be expanded up to 32 GB SDRAM, Dual-channel.  The GeForce GTX 1060 will likely become obsolete sooner, even though the performance is currently sufficient for high to most extreme details – at least at the native Full-HD resolution.

Intel’s Core i7-8750H is a standout amongst the most prevalent notebook CPUs. The six-core chip contains 9 MB of L3 cache and can process up to 12 threads in parallel gratitude to Hyperthreading.

As far as performance goes, this laptop can easily handle everyday chores, while running cool and quiet. 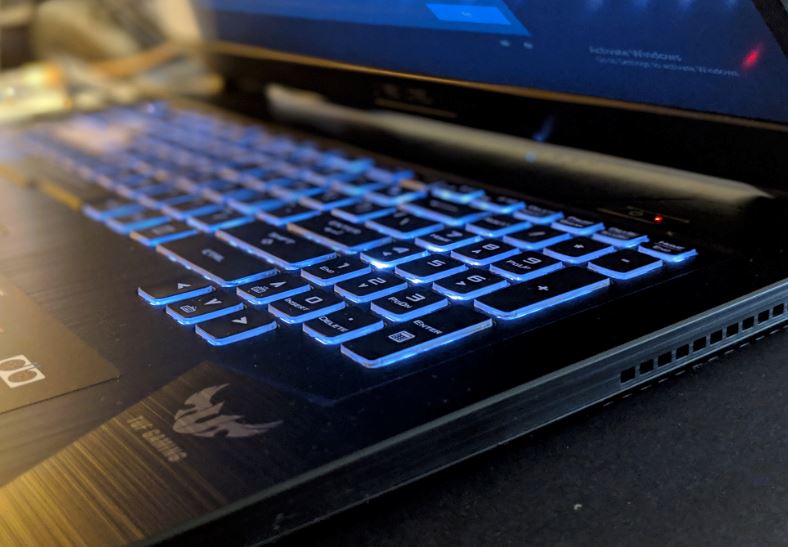 Asus offers three fan modes depending on the usage of the laptop: Silent, Balanced and Overboost. The balanced mode works the best, as the management does a good job at keeping the fans quiet with day by day use and just kick them on with multitasking and all the more demanding loads. The silent and overboost modes can be used while playing games which has a major impact on the performance.

Out of the box, the i7 in our example increase to its most extreme Turbo Boost Frequencies however rapidly reaches 95 degrees Celsius and balances out at about 2.8 – 3.1 GHz and a die-temperature of around 70-75 degrees Celsius.

The execution is really great. The GPU drops a little under its greatest Turbo frequency in gaming sessions, yet both the CPU and GPU keep running at extremely high temperatures. Undervolting the CPU enables it to keep running at greatest Turbo Frequencies while playing games, yet minor affects the GPU and generally speaking gaming performance. Changing to Overboost basically just outcomes in a noise increment, while switching on Silent makes the workstation a lot calmer, however with a hit on performance.

Regardless of whether it performs 5-10% poorer than with different executions in this Asus TUF FX705G, the GTX 1060 GPU remains an essentially quicker choice than the 1050 Ti alternative. Despite everything, you’ll need to acknowledge the high CPU/GPU temperatures which in time may prompt dependability issues. 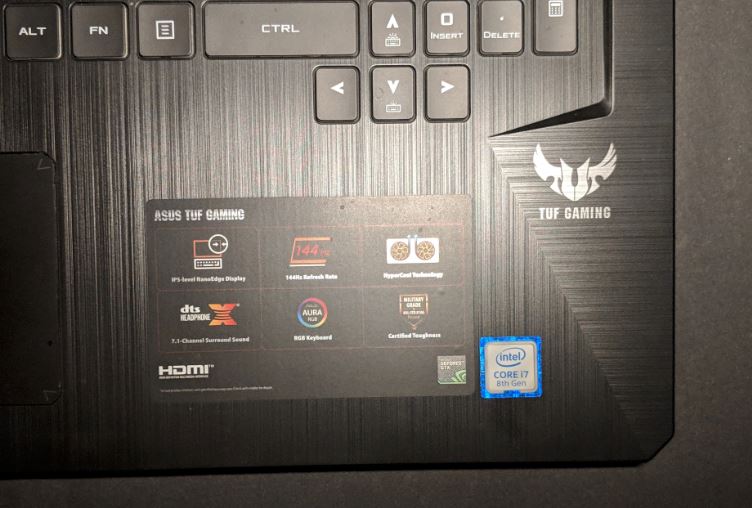 With day by day use, the CPU fan runs all the time, yet at barely audible dimensions in a calm room, when you’ll rather hear the turning HDD’s noise. With games, the fans increase to around 52 dB at head-level on Balanced and get noisier on overboost, to around 56-57 dB, however with next to zero effect on execution and performance. Changing to Silent makes the laptop is a lot quieter (41-42 dB), but at the same time has a significant effect on performance.

ALSO READ  A Badass Machine For The Realy Tough Business

Concerning the external shell temperatures, the FX705 remains genuinely cool while running games, with just certain spots on the underbelly, over the GPU, achieving higher levels. The Asus TUF FX705 series get a Wave 2 Intel Wi-Fi module with Bluetooth 5.0, alongside Gigabit LAN. The notebook performed flawlessly on wireless. It is one of the fastest laptops which worked so well without any drop in the network.

The speakers on the laptop are on the quieter mode. The sound comes from small cuts on the sides which are tiny, with little on the low-end, but the highs and mids are fairly good. The FX705 keeps the capacity to output surround sound to earphones and external speakers through the 3.5 mm jack. The camera is put over the screen, even with the littler bezels, and offers respectable shots insufficiently bright rooms, yet genuinely washed out. 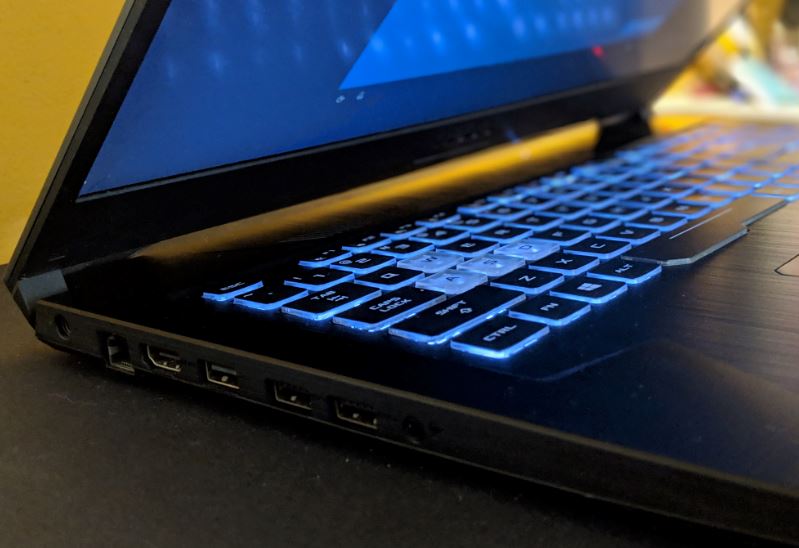 There’s a 64 Wh battery on the Asus TUF FX705, which is about normal for a 17-inch PC nowadays. There’s Optimus on-board, but also powerful hardware and a hungry 144 Hz 17-inch screen, so you’re not going to get great battery life with this laptop.

The bigger 17-inch FX705 series is additionally one of the better esteem devices in its class.

It’s smaller and well constructed, looks basic enough that will be acknowledged in stricter work/school environments, offers an RGB console and optional 144 Hz IPS screen, performs genuinely well, runs cool and goes on for a reasonable time on a charge. In the meantime, it has its quirks: the keyboard console requires firmer strokes to impel, there’s no card-reader or USB-C port, the GTX 1060 GPU just keeps running at about 90% of its abilities, the cooling keeps the CPU and GPU at high temperatures, the speakers are merely average and the IPS screen is not very bright or colour-uniform.

Asus plans to make up for the FX705’s inadequacies with aggressive pricing, so as to contend with the other reasonable 17-inch workstations available. With Asus TUF FX705, The company shows up that potential gaming notebooks do not need to be very expensive. A good value for money budget laptop can also deliver great results. This essentially wraps-up our review of the Asus TUF FX705GM. The comments section beneath anticipates your feedback, opinions and questions, however, and we’re around to assist on the off chance that we can.

Asus is one of the leading smartphone brands which has a huge line up of products available in the market for different needs. In the past few years, Asus has almost covered the entire market and different range. Recently Asus launched the Zenfone Live which could be a good device […]