Instagram has announced that it has built powerful machine learning tools that will remove all inauthentic activity generated by third-party apps which includes inauthentic likes, follows and comments. All these activities now violate Instagram new Community guidelines and terms of use.

This fight is against all the automated apps people use to get all type of followers, likes and comments on their post. Accounts which follow and unfollow back in hope of growing audience. Today Instagram has finally announced that it will use Machine Learning tools which will reduce the inauthentic activity on the platform making it clean for the audience. The engagement generated by these third-party applications violates policies and guidelines which largely affects the community. 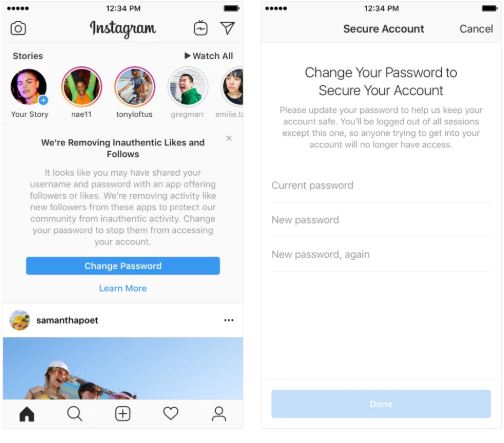 Also, those accounts which may have unknowingly shared their login credentials with any third-party apps will receive notification to simply change the password to get their access back. All these measures will be an on-going process over a period of time. The accounts that continue to use third-party accounts to grow their audience may see their Instagram account facing issues and impacting the overall experience.

Follower accounts on apps like these have become a major source of people influence and earning potential. This has indirectly affected many brand sponsorship which are based on their audience size.

Although Instagram is been into the process of removing fake accounts over a period of time, this could be the first time it has to take action against likes. This time along it has publicly discussed removing fake activities.

The Platform will take strict action against such accounts by tracking them down. These accounts will receive an in-app message alerting them that Instagram has removed all the fake followers, likes and comment. Instagram will also ask to secure their account by changing the password. People using such services mainly give access to the third-party apps for all the engagements, according to Instagram all such activities affect the community and also make the account less secure. Not only people directly use third party accounts, but they also pay a good amount to get engagement. Accounts are been seen selling not only fake accounts, likes and comments. People are also selling subscriptions to Netflix, Amazon Prime and Hotstar at a discounted cost.